‘Stamping’ Out North Carolina’s HB2 at The Wild Goose Festival

BeeNest Films teamed up with Evangelicals for Social Action to stage a “Stamp Your Cash” demonstration at the progressive faith festival, the Wild Goose Festival in Hot Springs, North Carolina in order to speak out against HB2.

The festival had been held in the same spot for the past six years, so when North Carolina passed HB2 it came as a real blow to the organizers of the festival who are morally opposed to the bill and its latent bigotry. So when I was invited to attend the festival by ESA in order to participate in a Racial Justice Institute Workshop they were hosting with the Faith Matters Network, I started thinking about how there could be some way to bring money into the state of North Carolina and make it express my opposition to HB2.

That is when I thought of where the Stamped Film Festival in my hometown of Pensacola, Florida got their name from:

Back in the 90’s, the gulf coast was a Mecca for the LGBTQ community over the Memorial Day weekend for Pride. Thousands of people would gather and celebrate on our beautiful beaches, but there were some squeaky wheels that did not like the influx of gay people coming into the area. In response to these complaints the organizers of the Pride festivities began stamping all of the cash that was generated with phrases like “Gay Money”. By the end the end of the year it was estimated that the LGBTQ community infused nearly 25 million dollars in the local economy. Interestingly enough, those squeaky wheels got a lot more quiet from that point on. 😉

Our objective was a bit different, but what we were hoping to do was give an outlet for this community of faithful people, most of whom identify as Christian, to not only speak out against HB2, but to also address the deeply troubling use of Christianity to support such a bill. Our stamps featured phrases like “Christians Against NC’s HB2” and “#WeAreNotThis”. 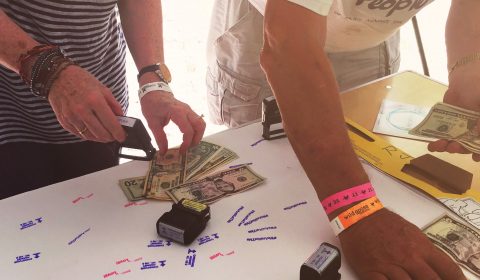 The response was fantastic! Festival goers pulling out their wads of bills and going to town with our provided stamps – And at the end of the festival, I went around to the vendors and gave each of them a stamp to keep and continue to use and mark all their bills. It was clear that people were very excited to have an opportunity to take back the narrative in some small way.

This brings me to what I found incredibly impactful about attending the Wild Goose Festival – Reclaiming the Narrative of Faith.

I’m going to be honest, the word “christian” has been allowed to take on such a negative and destructive connotation that describing myself as one has felt like a misnomer. I know many, if not most of my friends who were raised in a christian household, have now evolved into usually only feeling comfortable with describing themselves as “Spiritual” or as “a follower of Jesus, but not necessarily ‘a christian’”.

If this speaks to any of you, if you have ever felt disenfranchised by your faith community, I highly recommend attending next year’s Wild Goose Festival.  Ryan and I will see you there 🙂

Next post Bee Nest Films at the Macon Film Festival

Take-Away from Sundance Institute #ArtistServices Workshop: What Drives You, Matters