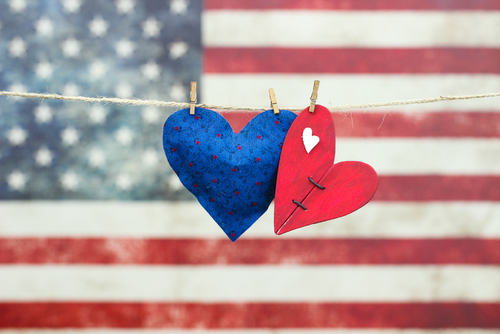 If you’ve read our previous posts, you’re probably already aware that we made our short film RSVP with the hopes to tell a story that bridges a gap between two groups that often have a huge rift separating them. Ryan and I could be called ‘amateur-compulsive-peace-makers”. The impulse is genuine, but not always entirely practical. And now faced with the most extreme rift in our modern day American democracy, well, at least in my lifetime, we’re having to manage the desire to “fix everything!! all at once!!”, and also the desire to “hide far-far away” and hope that four years from now, there will still be a democracy left that we can rejuvenate after the Trump era blows over.

The Goldilocks answer between these two impulses seems to be: Invest in the long haul incremental change in how we handle “partisanship” in our day to day interactions. What does that translate to, exactly? Patience, Empathy, Communication, Humor, and Compromise. In other words, approach our two party system the way we would approach a healthy and thriving marriage.

Ryan and I learned early on in our marriage that if we ever made the mistake of thinking of each other as being on opposite sides, it would mean the downfall of our marriage. Even if we disagree, or have been hurt by a misunderstanding or mistake, we have to always remind ourselves that we are both members of the same team. And I think we as Democrats and Republicans could really use that approach right about now. But, we may need some serious couples therapy. Because, America, we’ve been through some sh*t, and it looks like we’re in for a bumpy ride.

So, during a time when our divisions appear almost insurmountable, we’re all being called to examine how we can bridge the gap between vehement ideologies, and find a middle ground that supports the equality, dignity, and prosperity of all people.

This middle ground can be fostered by dissolving the barrier of our ego’s need to “always be right”. This need only hinders our ability to truly hear one another. The first step is to recognize the truth in someone else’s experience. Then, to the best of your ability, explain the truth of our own experience with clarity and compassion. This process is meant to address deeply help subconscious patterns that may be causing pain and handicapping our relationship. When these patterns of hurt remain, and are rejected as “not real” or “not worthy of attention”, then poisonous resentments can manifest. But in contrast, when two people succeed in objective self-examination, listening, and equal compromise, they are each able to identify how each of them have an opportunity to grow and deepen their bonds of commonality. This is when unified progress can occur. Is it just me or could the U.S.A. really use some unified progress?

It has struck me how much our two-party political process in the United States now resembles a painfully unhealthy marriage. I would love to explore this, by observing people on either sides of the political spectrum, and how they interact with one another. Ideally, I’d love to take a documentary crew across the nation, plus a talented marriage counselor, and conduct several intensive “political counseling sessions” between two people on opposite side of the political spectrum.

They would be two strangers who likely have mistaken preconceptions about one-another; along with deeply held hurts, fear and guilt. I’d like to have the therapist guide them on a mutual journey of discovery, recognition, and growth. Their guide would be an objective, moderate, and wise marriage counselor who is dedicated to respectful communication and the pursuit of truthful revelation. Revelation! I seriously want nationwide revelations of unity! ….Is that too much to ask? Probably.

But at the very least a documentary like this could serve as a case study for diverse audiences to learn how to better communicate with one another, particularly those who hold differing views. And hopefully help eradicate all the latent destructive patterns that are at play in our political discourse. Better yet, we could reveal and reinforce the commonalities and ideals that we still share and strive to maintain in our democratic society.